A salute to the Indian Armed Forces
For the battles they have fought for us… for the glory they have brought to the nation… let us salute our brave heroes on the Flag day of India.
The Flag Day of India is a day dedicated towards appreciating the courage of our Indian Armed Forces and collecting funds for the welfare of its personnel. This day is also referred to as the Armed Forces Flag Day and is celebrated in India on the 7th of December every year.
With an intent of acknowledging the contributions made by our Armed Forces and creating an awareness of the same, the students of Std IV A conducted a special assembly under, ‘Perform to Transform’ programme. The virtual event commenced with a special prayer, dedicated to the safety and well-being of our brave hearts. Following this the thought for the day and significance of the special day were shared. While sharing the significance of the day it was emphasized that it is the responsibility of the civilians to take care of the families and dependents of the armed forces personnel who fight for the country. This was followed by a message by Lt Col RR Jadhav, Dy Director, Dept of Sainik Welfare, Maharashtra. Lt Col Jadhav gave us an insight about the purpose behind the setting up of the Armed Forces Flag Day Fund.
Interesting information about the Indian Armed Forces and the Armed Forces Flag was effectively presented by the student participants. A few even shared their thoughts behind joining the Forces. A heartfelt tribute to the real ‘Shershah’, Late Capt Vikram Batra was paid through a speech along with the melodious rendition of-‘Jhunda Ooncha Rahe Hamara’ and ‘Thank you Soldiers’. As the assembly proceeded, the audience were treated to a well-scripted skit and a beautifully-composed poem, both of which effectively conveyed a gratitude message to our brave soldiers who often sacrifice their lives for our safety.
The assembly culminated with glimpses of the Flag Day celebrations held in the VPMS, Pune campus. Student volunteers enthusiastically distributed small flags and car stickers to our dear principal, Mrinalini Ma’am, vice principal, Amol Patil Sir and all their teachers.
The virtual celebration finally concluded with a pledge and an instrumental version of Vande Matram. 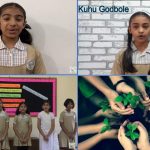 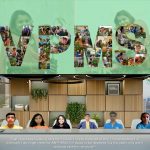