Generations to come, it may well be, will scarce believe that such a man as this one ever in flesh and blood walked up on this earth. Albert Einstein
In remembrance of Mohandas Karamchand Gandhi, on his 152nd birth anniversary, the students of class IX D of Vikhe Patil Memorial School, Pune celebrated Gandhi Jayanti, virtually, in a unique way by presenting a special assembly on the occasion. It was the brainchild of the Principal, Ms. Mrinalini, to have every class celebrate a particular theme/ topic through the virtual platform. Besides the regular teaching and learning process, albeit through remote methods, these activities have inculcated a deep sense of belonging, developed leadership skills, technological skills and teamwork among the students.
The programme commenced with a melodious rendition of the devotional hymn ‘Vaishnava Janato’ which became popular during the lifetime of Mahatma Gandhi and was rendered as a bhajan in his ashram at Sabarmati, in Gujarat.
Keeping to the theme was the thought for the day followed by certain amazing and little-known facts about Gandhiji. These were displayed on the artwork created as posters and time lapse videos prepared by the students. Adding variety to the programme, some of students showcased their musical talents by playing ‘Dedi Hume Aazadi’ and ‘Raghupati Raghava Raja Ram’ on the synthesizer and violin respectively. The young narrators and budding poets of the class linked the programme keeping the audience interested in it. 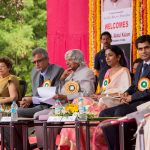 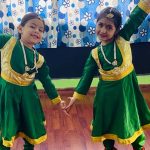