On 19th February 2022 the students of Std I B of Vikhe Patil Memorial School celebrated the birth anniversary of the great warrior Chhatrapati Shivaji Maharaj. A special assembly was conducted on a virtual platform to honour this great leader of our nation. The assembly started with the prayer ‘Guru Bramha’ followed by the traditional lighting of the lamp. A song ‘Shivraaya Arti’ composed by the great Veer Vinayak Damodar Savarkar was played by a student on the piano. The inspirational thought of Shivaji Maharaj ‘Freedom is a boon and everyone has the right to receive it’ was read by a student. Shivneri fort near Junnar is the birth place of Shivaji Maharaj. To depict the celebrations on his naming ceremony at the Shiveri Fort, a beautiful dance performance on the song “Jhulwa Palna Bal Shivaji cha’ was put up by the students. Interesting facts like, Shivaji’s name is derived from the name of a regional deity by the name Shivai , he was secular, a staunch supporter of women who stood for their honour and he is called the father of the Indian navy were read by the students. A powada on the valour and intelligence of Shivaji Maharaj was sung by a group of students. Inspirational stories like, the siege of Panhala, escape from Agra and the combat with Afzal Khan were enacted by the students. The students reminded everyone to inculcate the values of secularism, patriotism, teamwork and respect, which Shivaji Maharaj wanted each one to follow. The assembly was concluded with a vote of thanks. It was an absolute treat to watch students enact the life, teachings and preachings of the great warrior Shivaji Maharaj with enthusiasm and eagerness. 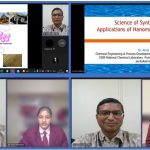 Guest Lecture on Science of Synthesis and Applications of NanomaterialsLatest News 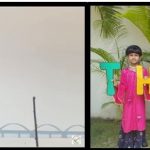