The students of Class-2A of Vikhe Patil Memorial School, Pune celebrated Marathi language day on the 27th February 2022. This day is celebrated to commemorate the birth anniversary of eminent Marathi poet Vishnu Vaman Shirwadkar who is popularly known as “Kusumagraj” in Indian literary circle. Marathi being the official language of the State of Maharashtra, the main focus of this celebration is to promote and sustain the richness of Marathi culture among the young generation. Marathi language contains some of the oldest literature of all modern Indo-Aryan languages, dating from about 900AD. The government started celebrating ‘Marathi Rajbhasha Gaurav Din’ after Kusumagraj’s demise in 1999.
This celebration aims at inculcating and honouring the rich history and literature associated with it among Marathi-speaking community in the state. A special assembly for the same was conducted online where all the students participated enthusiastically in various programs depicting the significance of Marathi language.

for our country and is required for transforming any nation into a great nation, was recited in Marathi.
All the students performed their role enthusiastically and enjoyed doing their acts. Marathi language has its own importance and beauty. We all are aware of the fact that “If we talk to a man in the language that he understands, it goes to his head. If we talk to him in his own language, it goes to his heart.” We also know that communicating in one language is not to replace another but it serves to augment our knowledge.
The main aim behind this celebration was to reconnect everyone to our roots, our native tongue and to aspire everyone to inculcate the language of pride, “Marathi”. The online celebration ended with vote of thanks and expressing gratitude to all those who supported and contributed towards the success of the programme. 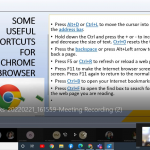 Report on Internet Tips and Tricks and Emerging TrendsLatest News