Special online Assemblies were held across the school to celebrate the ‘Parakram Diwas’ – 125th Birth Anniversary of Subhash Chandra Bose.

A special assembly was planned for the students of the Lower Primary Section with intent to provide brief information about this great leader whose patriotism was defiant. It started with sharing of Thought for the Day, as he very much believed that, “Freedom is not given, it is taken.” Fondly called ‘Netaji’, he was greatly influenced by the teachings of Swami Vivekananda. He was a model of diversity by region, ethnicity, religion and even gender. Use of slogans like “Jai Hind” and “Dilli Chalo” inspired many Indians to strive for freedom. He revived the Indian National Army or the Azad Hind Fauj. There was a role play performed by Std III students with great energy and enthusiasm so that this could help other students familiarize and engage themselves. The activity also enhanced their imagination which in turn helps in fostering their social and emotional development.

Nisha Kulkarni from Std IV gave an insight into the life and achievements of the great personality. The students watched a short film to know more about Netaji’s role in India’s struggle for freedom. After this, as a sign of respect and gratitude Vedika Raundhal recited a poem which was dedicated to all the freedom fighters who laid down their lives and made countless sacrifices for our nation. After a brief prologue, the students of Std V dedicated time to watch a very enriching video which enabled them to know and understand the legendary personality and his contributions to the country. Effective, impactful and motivational words shared by Netaji during his various interactions. The students paid a musical tribute to the gem of the nation who will be treasured forever by marching towards patriotism as they tuned in to the catchy “ Kadam …Kadam …Badhayae Ja …., the regimental quick march of Netaji’s Azad Hind Fauz. The event concluded as the students discussed and shared their perceptions about what national pride means to them, there by promising themselves to inculcate Netaji’s sense of patriotism, what our country truly needs in these current times.

Students of Std VII mentioned some facts on Netaji’s life and a poem recited in Bengali. The session ended with a beautiful documentary on Netaji’s life followed by the National Anthem, a flute recital.

The students of Std VIII recited two poems, one in English and the other in Hindi highlighting the valor and heroism of Netaji Subhas Chandra Bose. The event progressed with a marvelous dramatic mono act in Hindi that depicted a part of a historic moment from Netaji’s life in the formation of the Azad Hind Sena.

A few unknown facts about Netaji’s life were shared by the students of Std IX. Soham Kulkarni performed a mono act as Netaji Subhas Chandra Bose. This was followed by a short documentary on the life of Netaji.

Std XI had a Power point presentation by Shreeya Mulye bringing out the major events of Netaji’s life. The formative years of his life was explained by Kedar Kenjalkar. Videos of various events like the Haripura Congress session of 1938, Netaji being welcomed in Singapore, Netaji’s speeches were a part of the PPT which added to the celebration. This was followed by recitation of the poem ‘Khooni Hastakshar’ written by Shri Gopal Prasad Vyas, recited by Shreeya Mulye. Posters made by Srujan Purohit and Sujal Gandhi were a visual treat. The assembly had varied acts such as speech, poetry, special quotes, and a documentary on Netaji’s life with poster presentation. 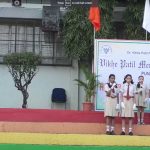