15th October is celebrated as Worlds Students Day, to commemorate the Birth Anniversary of the 11th President of India, a renowned scientist, philosopher and teacher and fondly called the Missile Man of India, Bharat Ratna Dr.A.P.J Abdul Kalam, our very own People’s President.

Dr. Kalam has always been an inspiration and a guide to students across India. His inspiring worlds and humility have touched the hearts of millions across the world. Vikhe Patil Memorial School, Pune under the able leadership of the Principal, Ms Mrinalini, leaves no stone unturned when it comes to celebrating the Birth Anniversary of Dr. Kalam who had visited the school in July 2014 and interacted with the students.

In remembrance of Dr Kalam, on his Birth Anniversary, the students of class VII D of Vikhe Patil Memorial School, Pune celebrated World Student’s Day, virtually, as a special assembly
under the ‘Perform to Transform’ Programme.

The programme commenced with a melodious rendition of the devotional hymn ‘Humari hi mutti me aakash saara..’ Following the prayer was the thought for the day and the importance of the day which was followed by a few facts about Dr Kalam’s life. Adding more fervor to the programme were a few quotes by Dr Kalam being explained both in his mother tongue Tamil and also in English.
Two skits, one depicting an incident from Dr Kalam’s life and another depicting the aspirations of today’s youth, well scripted and enacted added more colour to the programme. A biography on Dr Kalam’s life and a book review of his book, ‘Wings of Fire’ gave enough insight to the viewers about Dr Kalam as a person and the knowledge he shared with the world. 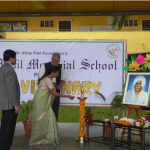 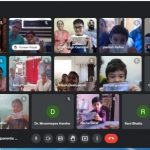